Tel: (909) 758-4715 | Email: custserv@goodyearrubber.com
Seals are rubber manufactured parts that act as a bonding agent to protect and provide closure for certain parts. There are various attributes of seals that include aerodynamic qualities, high temperature withstanding, air transport, thermal insulation and thermal conductivity.
Elastomer seals are made of silicone, fluorosilicone, nitrile, ethylene propylene, fluroelastomer and/or neoprene. Seals can also be reinforced with fabrics and covers like fiberglass and/or Inconel knit wire. This helps strengthen rubber therefore creating a better seal.

An evaluation of different types of seals are as follows.

Bulb Seals, also known as a P Seals, serve to seal low pressure objects. This type of seal is best for straight compressive loading and can harbor some transverse movement through the rolling of the bulb. One of the identifiable aspects of this type of seal is that they are usually retained with a cover plate on the lip. Just like any other specialized object, these seals can be improved or changed. The “D” variation has a shaped or crowned bulb.

A Double Bulb Seal offers an increased amount of safety due to the addition of a second bulb within the seal. The structure of this seal is contained with a cover plate between the two bulbs.

Also known as an Omega Seal, a Center Bulb Seal installs by sliding a mounting foot into grooves. These seals can also be upgraded with a rounded triangular bulb that can be used to increase sealing force.

Another low pressure seal is a Center Bulb Seal. Also known as a Wraparound Mount, these seals are mostly used for space-constrained applications. In certain instances, the simple snap fit of this seal is sufficient for retention. In other instances, an adhesive or cover plate is used for efficiency. The force of a Center Bulb Seal, along with other bulb seals, can be enhanced with a sponge rubber core.

Bulb seals are great for low pressure jobs but when it comes to a higher intensity, the next best choice is the U-Section Seal. These seals have a medium pressure withstanding that is used to seal two surfaces that have a large dynamic gap variation. U-Section Seals can be used in high temperature applications due to its higher durability.

Lip Seals are high pressure seals that utilize differential pressure in order to increase sealing forces. Lip seals are mounted on the non-pressure side to seal gaps between two parallel surfaces. The “Y” Section of a lip seal is the most common design for window seals. This low pressure seal mounts by tightly snapping over the edge of one surface and sealing onto the other. This goes to show that seals aren’t only used for big industrial purposes. Double Lip Seals offer high pressure sealing qualities and seal against pressure from either side of something for maximum efficiency. More variations include the Space Constrained Mount that includes a smaller envelope and a Kiss (Bellows) Seal that is capable of handling lateral movement. This transport seal also is used to seal against land on a door.

Mechanical and Fire Barrier Seals are made from silicone, flurosilicone and natural rubber. These low friction seals can be produced in long lengths and are reinforced with fabric or fiberglass.

Inflatable Seals, made from silicone, neoprene and natural rubber, can seal challenging asymmetrical surfaces. This type of seal can be found on doors, access panels and canopies.

Spliced Seals can be molded, injected or reinforced into corners. Mostly used in aerospace, industrial or commercial settings, spliced seals are efficient due to their large diameters.

Make sure to stay connected with Goodyear Rubber Company of California to see how we can serve you. 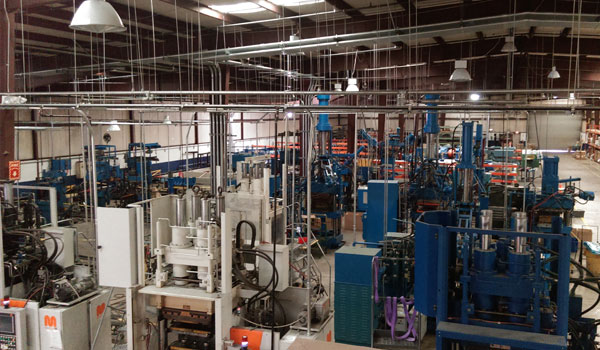 Ready to Get Started? Click here to Request a Quote